Thanks to everyone for passionately advocating for the Conversation History card in the side bar! We sincerely apologize for the early removal of this feature and have now enabled it again.

We are happy about more feedback around why you are using the Conversation History card, so we can make sure to explore all use cases for the Timeline!

Thanks for your feedback
Announcement
February 18, 2020

👭 Timelines of your customer friendships

Today we have removed the conversation history card in your side bar in order to give more weight to the conversation timeline that shows you the context and frequency of your relationship with your customer.

The timeline lets you: 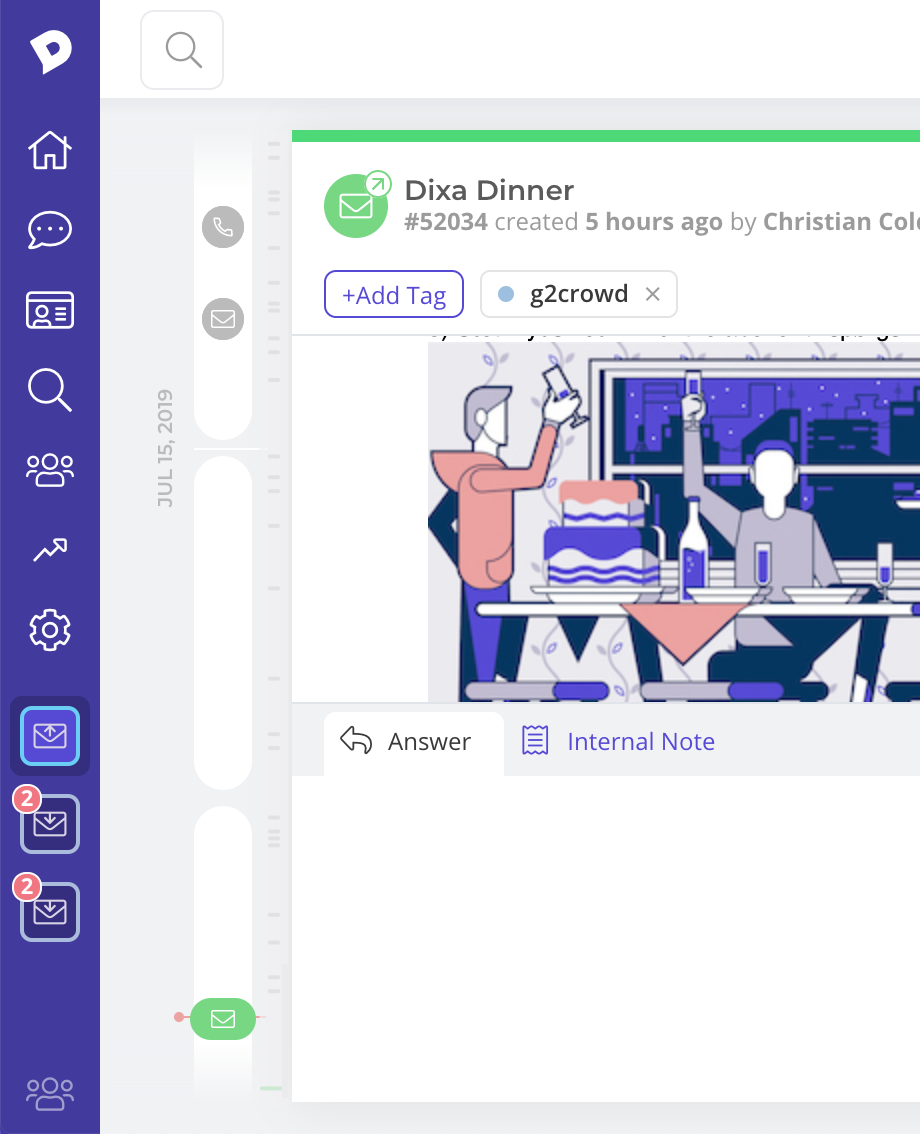 Thanks for your feedback
Announcement
February 13, 2019

On Tuesday Feb 19 we will update your Chat Widget to a new improved design.

This will affect your customers using your chat via your website, but not affect the agent workflow, where agents will handle chats the same way they do today.

Please familiarize yourself with all the changes by reading "Product Preview: New Chat Widget" below. Another post will be added here on Tuesday when the new Chat Widget has been rolled out.

If you have questions, don't hesitate to reach out to us.

Thanks for your feedback
Announcement
January 01, 2019

Dixa is about being where the customers are. That’s why we've added a new channel to the mix: Facebook Messenger!

With the addition of Facebook Messenger, you can answer private messages you receive on your Facebook Page(s) in Dixa as new conversations and prioritize them with your other conversations.

Because we are a channel neutral platform, Facebook Messenger conversations work just like any other conversation in Dixa and include: 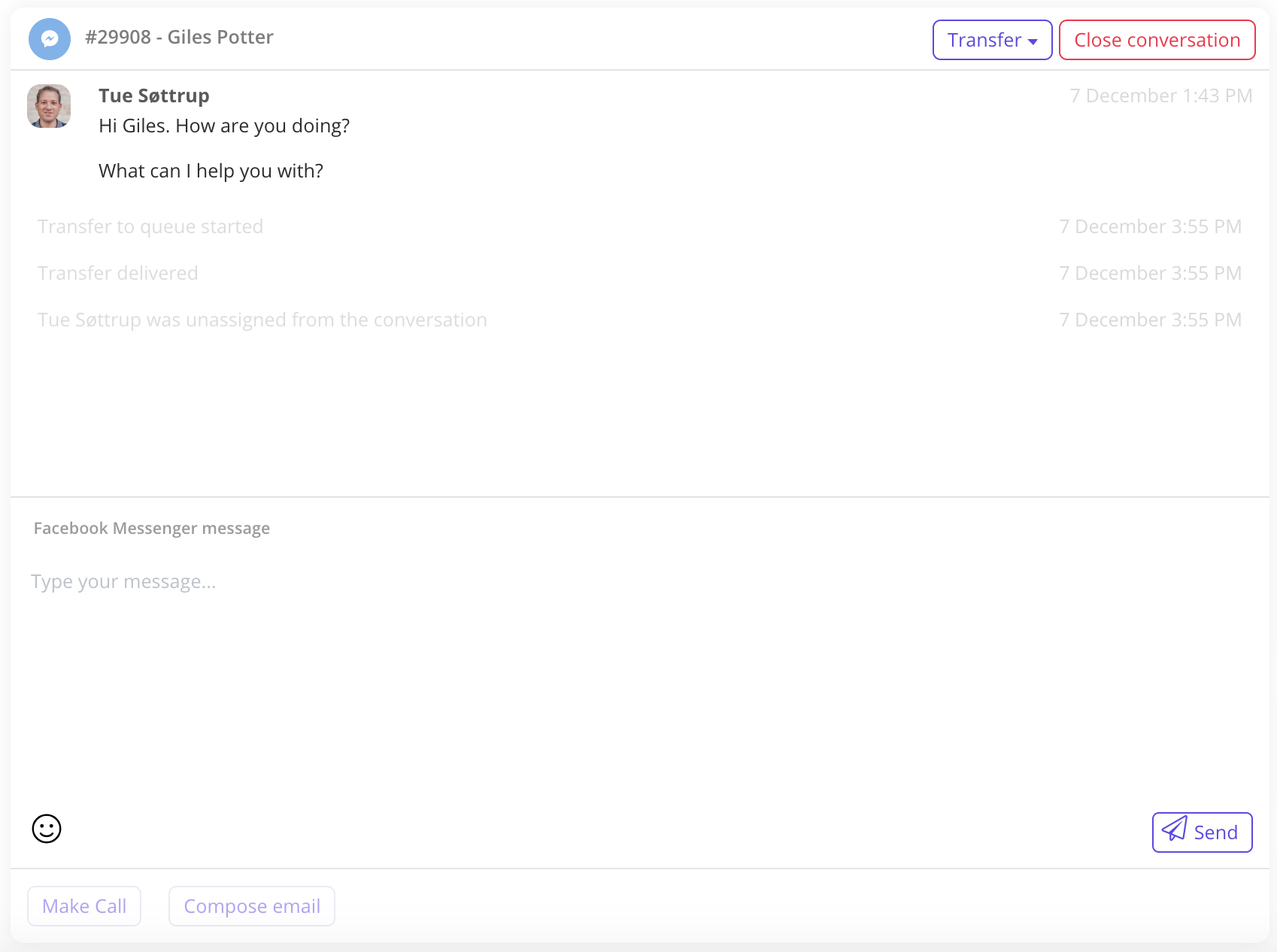 Use all the features you're already used to, like transfer, close, mark as follow-up and sending messages. Oh and we have a neat little Emoji feature too!‍

You need to setup Facebook Messenger as new channel, which requires a rather advanced flow (thanks to Facebook), which can take some time to complete. You can set it up under Settings > Channels & Routing > Facebook Messenger.

*Facebook Messenger conversations can currently go into a queue, but do not have flow builder options yet. We expect to build these out at a later time.

🔎 Filter on multiple of the same parameter

You can now select multiple of the same parameter when filtering your list of conversations:

This means that you can, for example, see all Chat and Facebook Conversations that are Open and in multiple Queues. Go ahead, try it out!

You can now route calls based on the phone number that is calling. This action can be found in your Call Flow editor under Caller routing: 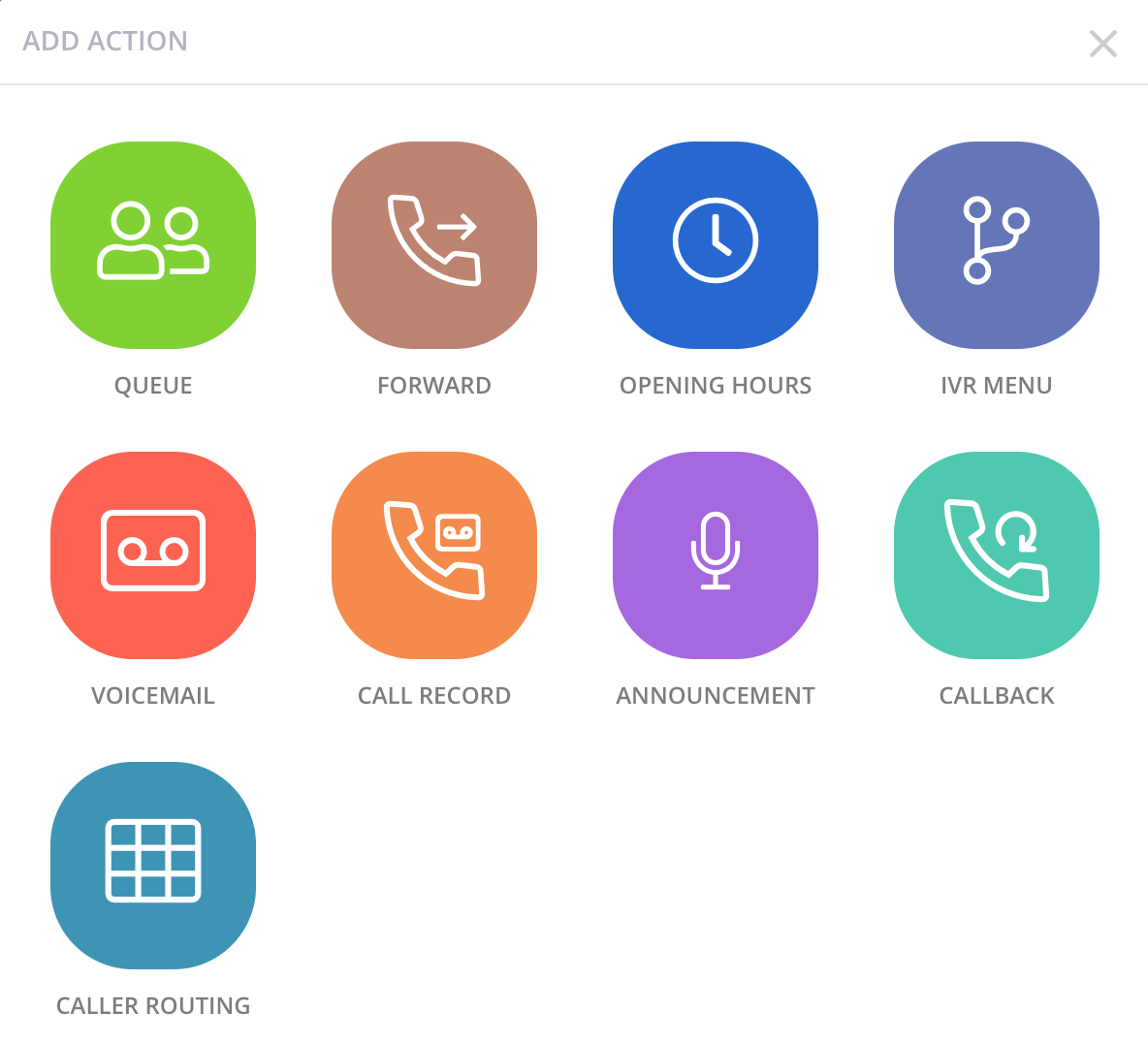 Once selected, you can specify which phone numbers you want to route by: language, country code, city code etc. 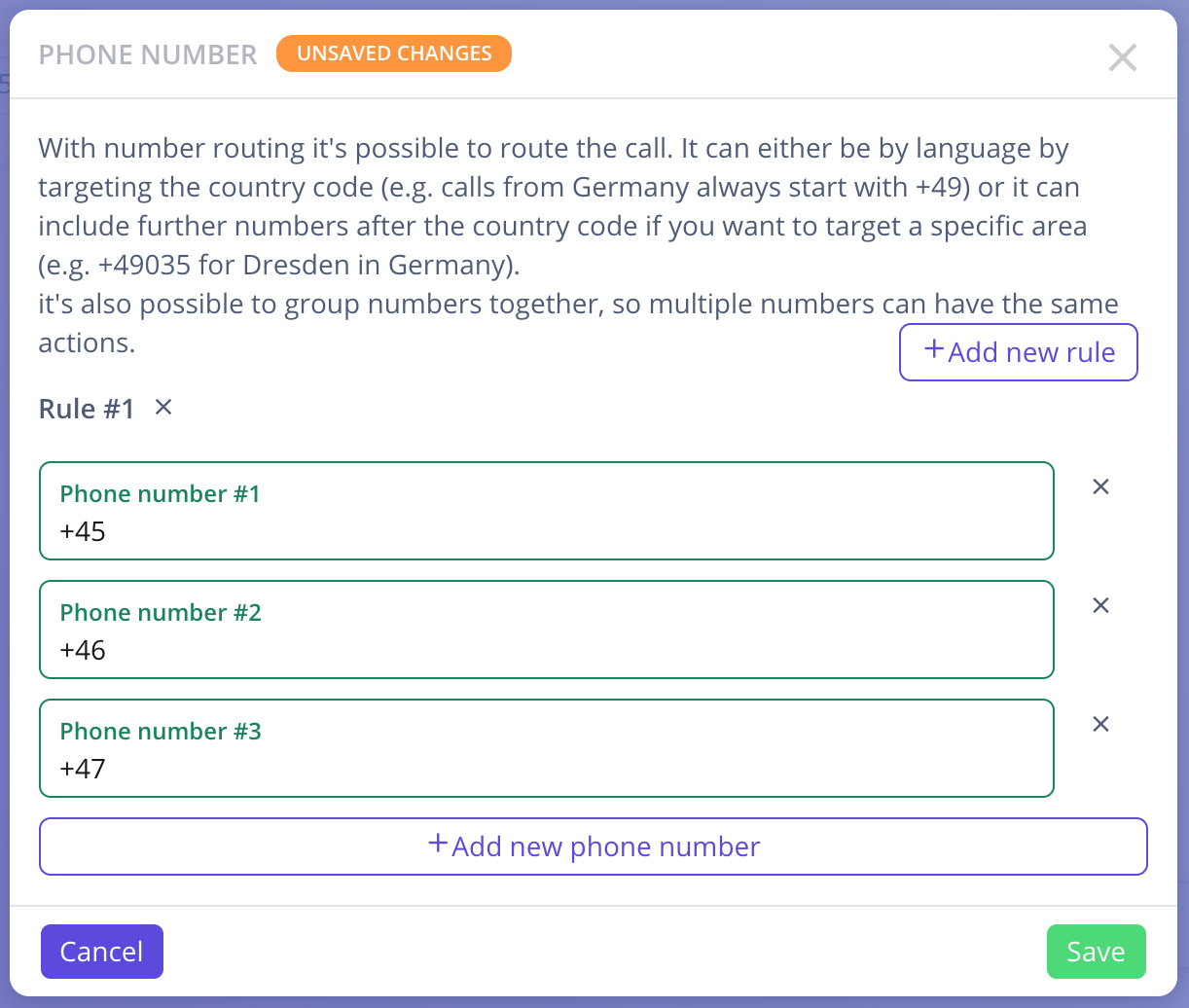 In the above example I am specifying the country code for Denmark, Sweden and Norway (aka Scandinavia). After specifying it, you can route based on whether or not it’s a match:

You probably won't want to follow-up with every single customer, but rather follow-up with specific customers like your VIP customers. Therefore, you can specify whether you want to offer abandoned conversations by queue: 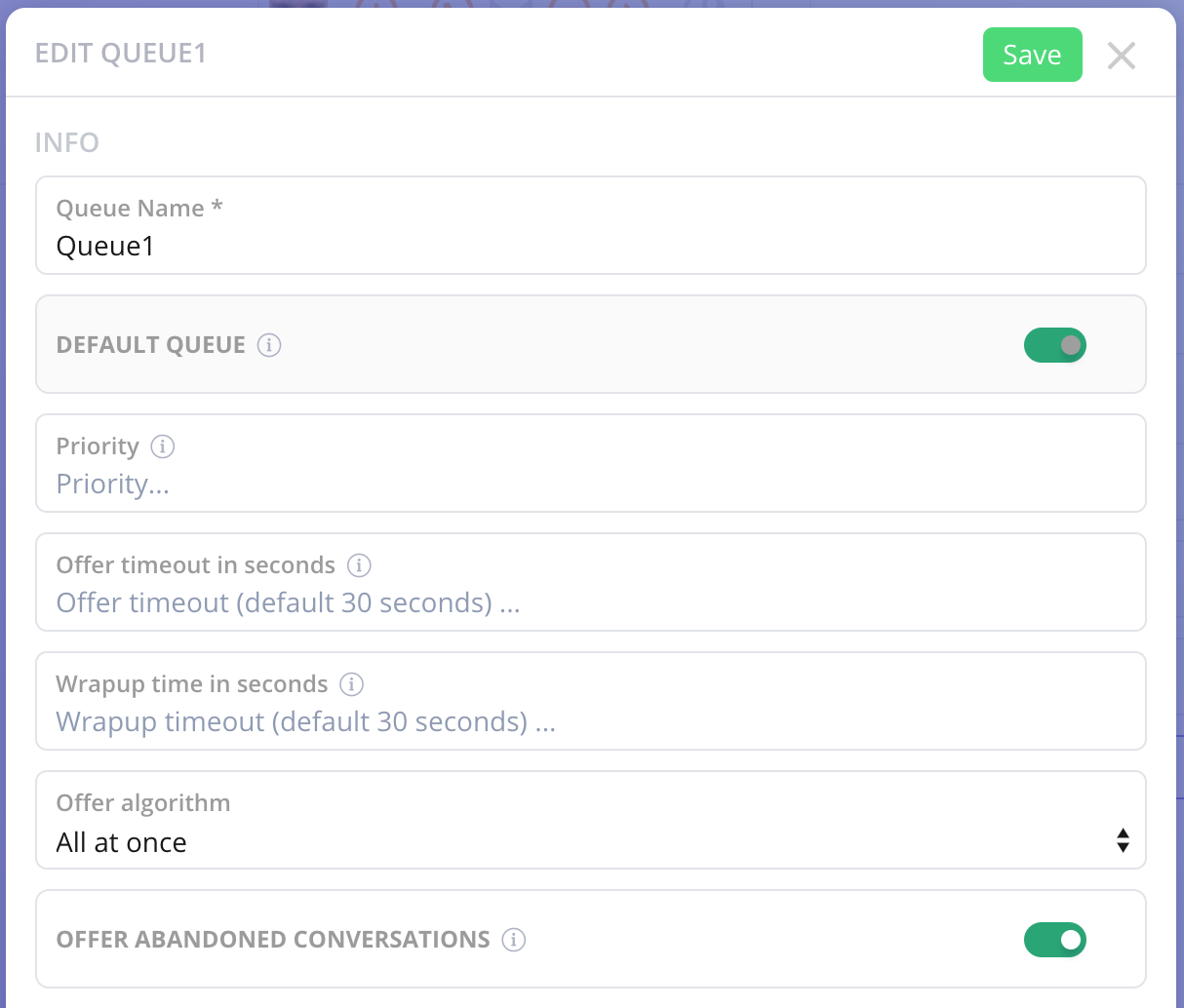 Dixa provides a Microsoft Installer packages (MSI) for IT Administrators to install Dixa for Windows for multiple users. These packages are recommended for customers who need to deploy Dixa on hundreds or thousands of machines. If you don't need to deploy Dixa at large, please use the installer found here.

Who is the MSI installer for:

The MSI installer is best for companies where employees work from their own machine and want Dixa update automatically.

Thanks for your feedback
Announcement
December 03, 2018

We are excited to announce that we have a new way to deliver product updates! The updates that have traditionally been described in our monthly Release Notes delivered to your inbox will now be displayed within Dixa as they occur for your convenience.

*If you do not see the gift icon, refresh your browser window or desktop app and it should appear. 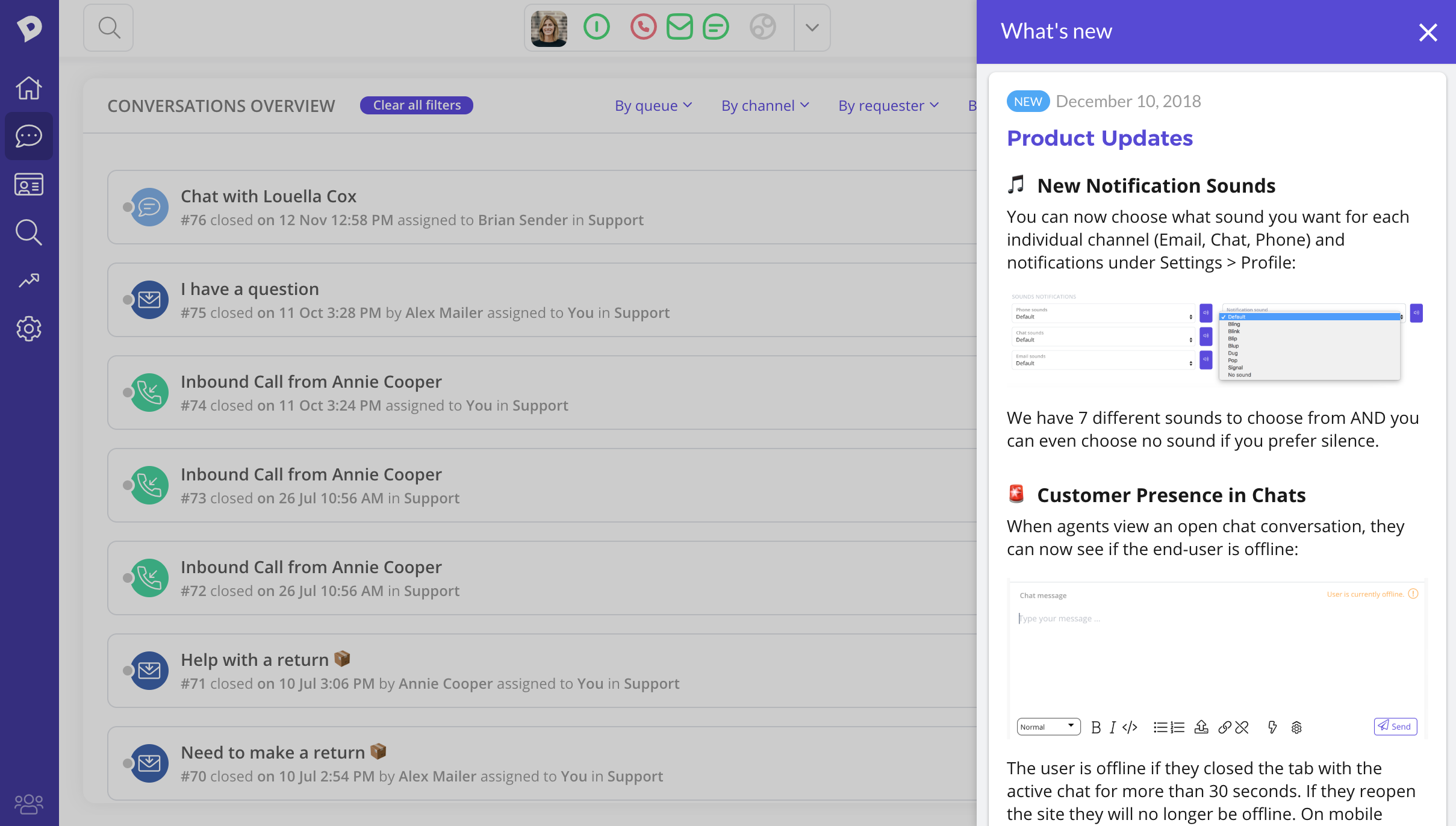 You can now choose what sound you want for each individual channel (Email, Chat, Phone) and notifications under Settings > Profile:

We have 7 different sounds to choose from AND you can even choose no sound if you prefer silence.

When agents view an open chat conversation, they can now see if the end-user is offline:

The user is offline if they closed the tab with the active chat for more than 30 seconds. If they reopen the site they will no longer be offline. On mobile browsers, the user will be offline when the website isn't being viewed.

This should help agents to know if the customer will see their replies.

When viewing the Conversations overview you might occasionally see a little "Updating" pill on a conversation:

This means that we are currently updating our databases for this specific conversation. Once the update is completed, the pill will disappear and the conversation will either fade in or disappear depending on which filters you've chosen in the overview.

You can now disable the keyboard shortcuts under Settings > Profile:

You can now filter by Assigned in the Conversations overview. By clicking By assignee > Assigned you can see all conversations that are assigned to an agent: 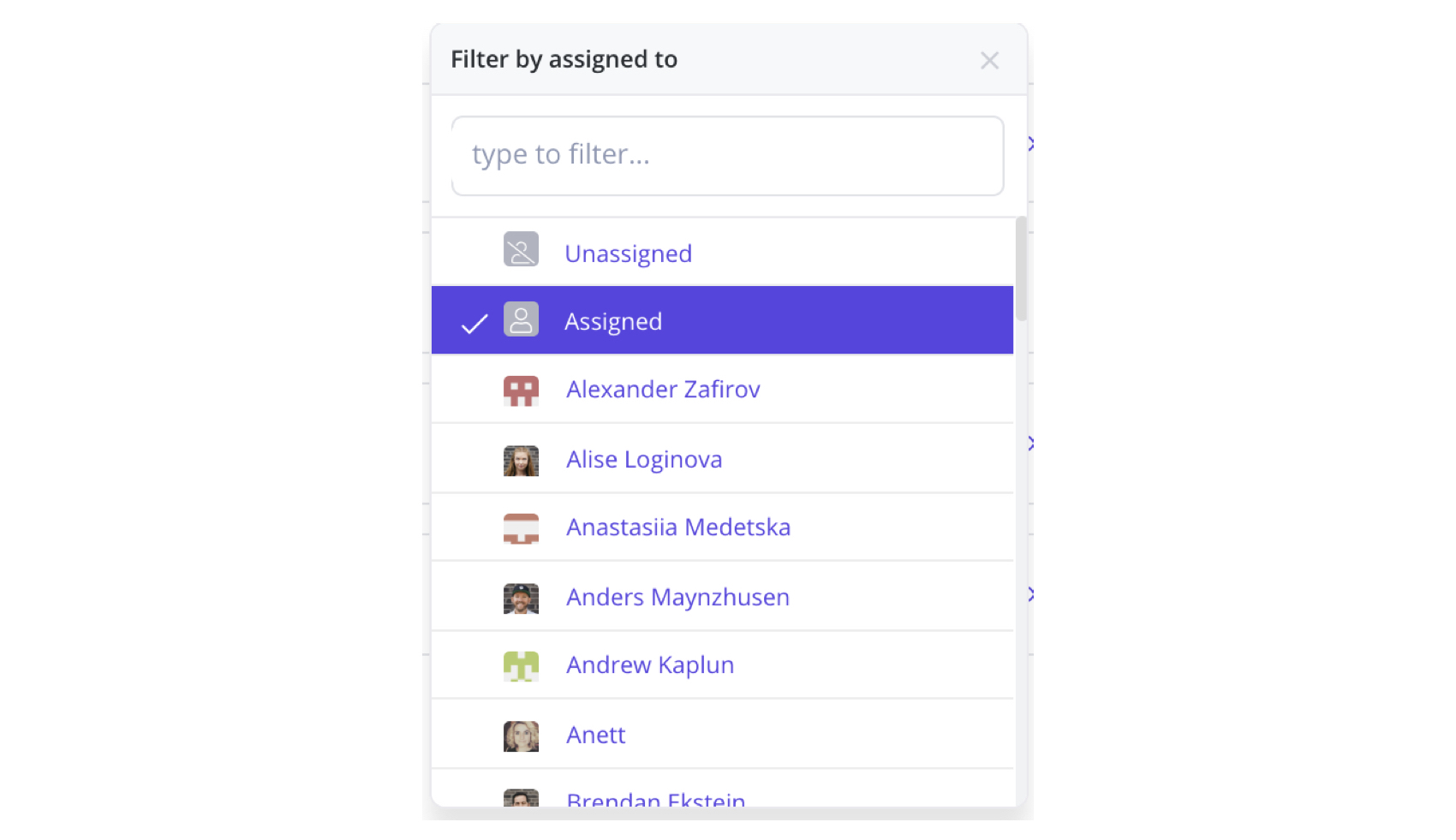 You can as also always filter by Unassigned.

You can now click each of the queue names on the Dashboard to see the Conversations overview associated with each queue. Don't get it? Try it out by going to the Dashboard (that's the house icon) and clicking one of the queues to the left.

We are excited to announce that Dixa will soon welcome a new friend to the platform, Facebook Messenger! To get a sneak peek, check out our latest Product Preview. 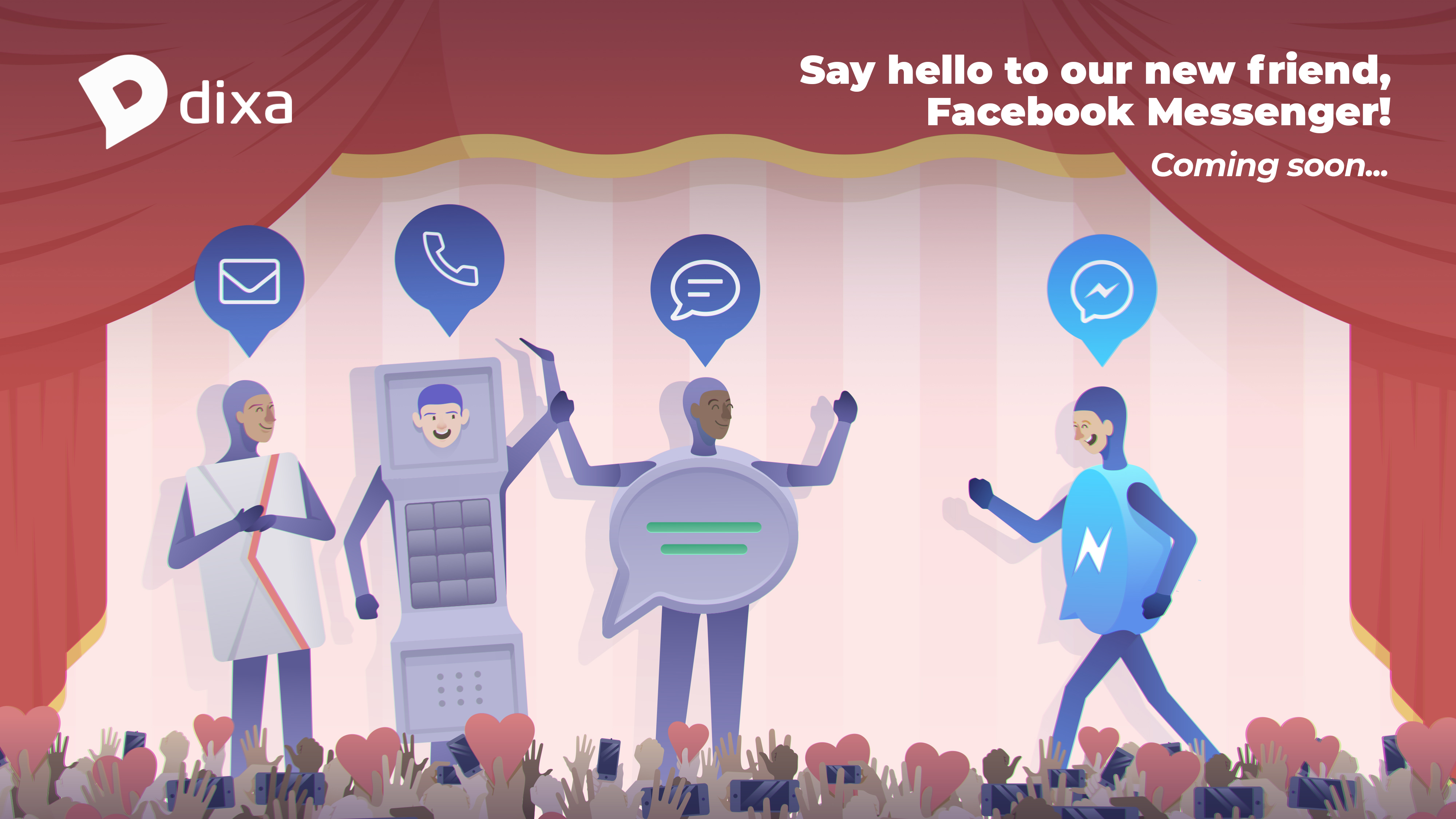 Thanks for your feedback
Announcement
November 02, 2018

You can now select multiple parameters when filtering in your Conversations Overview. This means that you can filter: Sales Queue + Chat + Open, for example.

Additionally, we’re currently working on the ability to filter based on multiple filter options within a single parameter (e.g. Phone + Chat), so stay tuned!

You can now transfer any conversation to a queue even if it has already been Closed (or is marked as Follow-up). This allows agents to act on Closed conversations that need more work.

When a Closed conversation is transferred to a queue, it becomes “Open” again and will be offered to available agents in that queue.

Conversations occurring in real-time are always prioritized over re-queued conversations when offered to agents. 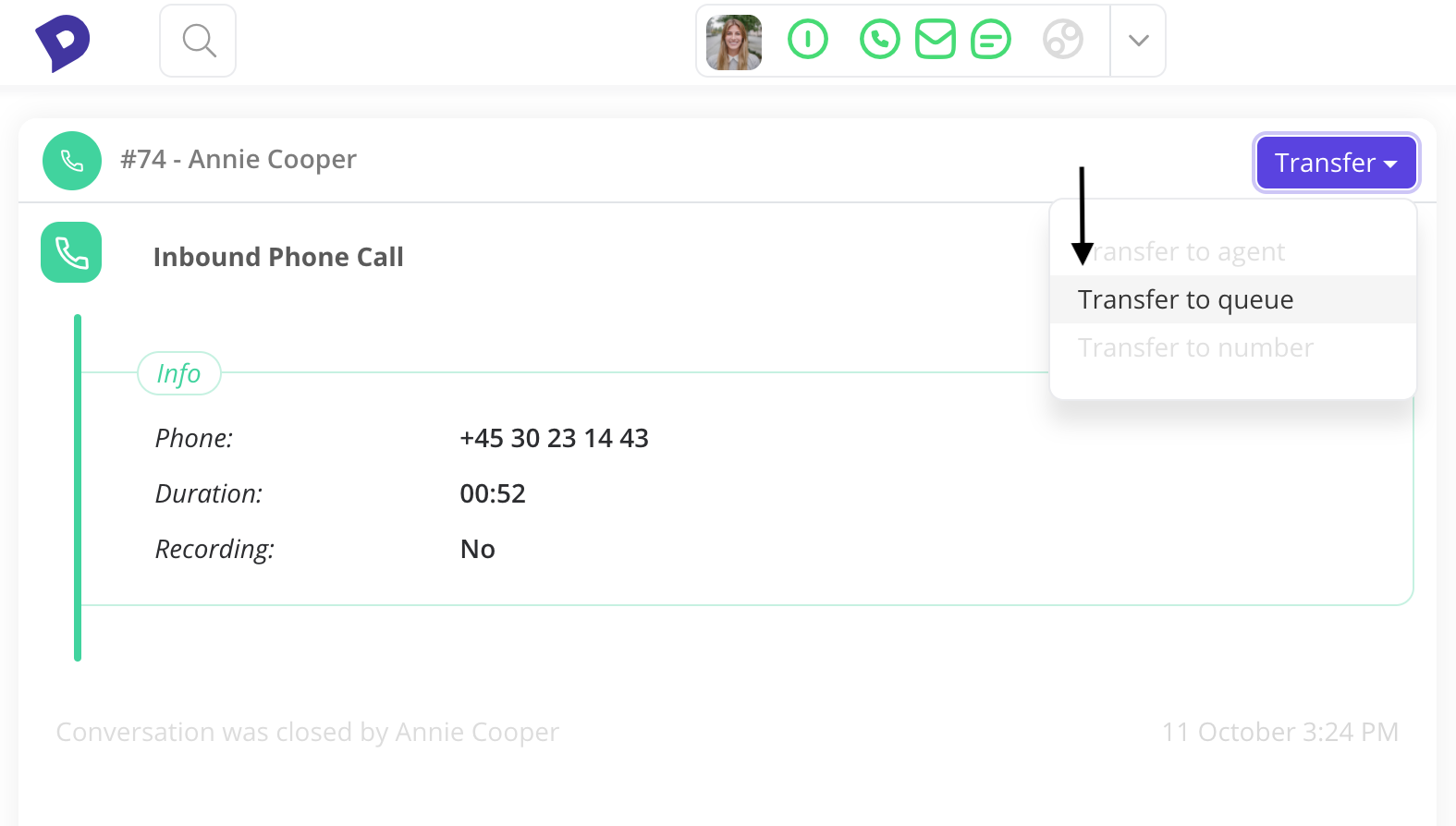 ✏️ Starting a New Conversation From a Closed Call or Chat

You can now select which outbound callback number you prefer to call customers back from.

In the next couple weeks, we will be rolling out a collapse feature for the left sidebar (that's the purple one) giving you more space to focus on the important stuff. Collapsing and expanding the sidebar can be achieved by hovering over the right side of the sidebar and clicking.

Thanks for your feedback
Create your own newsfeed